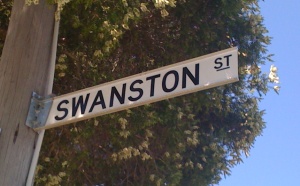 The new plan from the City of Greater Geelong for the Northern Section of the Swanston Street Bike Link is now available for community feedback.   The plan, which covers the section of Swanston Street North from McKillop Street, features almost exclusively one-way bike paths adjacent to existing footpaths.

The plans can be downloaded from the “Have Your Say” page on the City of Greater Geelong website: Swanston Street Bicycle Path Stage 2.  Feedback can also be submitted to COGG on the same page.

The new Northern section plan is almost entirely made up of bike paths adjacent to footpaths used by a large number of pedestrians.   This will of course create a greater risk of collisions between cyclists and pedestrians.  Hopefully this plan will be implemented in a way that pedestrians are aware of the bike path such that they don’t dangerously treat it as a footpath, and cyclists on the off road bike path are encouraged to travel at appropriate speeds.

The objections to the original plan included motor vehicles being slowed down due to the narrower lanes, reduction in on street car parking, and pedestrian safety concerns.

It would appear that there is not anywhere near the same number of objections to the new plans as with the original plan, making it look like the real objections were about taking road space away from motor vehicles and pedestrian safety concerns.

In fact, pedestrian safety would have been greatly improved if the Copenhagen style lanes were implemented, due to the lowering of the speed of motor vehicles and possibly even a reduction in the number of motor vehicles in the street.   It is still hard to understand how so many residents of a residential street could be opposed to the slowing of traffic on their street.

The new plan requires the removal of a number of trees beside the old Geelong Gaol between Myers Street and Little Myers Street to make room for the off road path, which was not required for the original plan that utilized a Copenhagen style lane for that section.

Green bike lanes will be marked to warn motor vehicles, and “Riley Kurb” (a rubber barrier designed specifically to separate motor vehicles from bike lanes), will be used in locations that cars may otherwise encroach unnecessarily on the bike lanes.

The new plan is likely to be popular with those who are young, less confident or novice cyclists.  It will give such cyclists the separation from motor vehicles they want for their safety and provide a link between the off road bike trails on the Barwon River, Corio Bay and the Bellarine Peninsula Rail Trail.

Many commuting and other experienced cyclists will not use the off road paths in the new plan as they cannot progress safely along such paths at the same speed as they can ride on the road.  This is due to the care required when riding closely to pedestrians, the requirement to use pedestrian lights, and having to wait for cars at many of the intersections that a bike have right of way at when on the road.