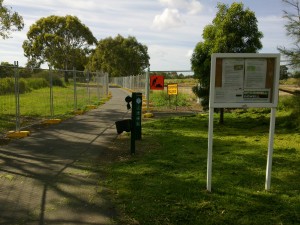 Site preparation works have commenced for this new bridge; at meetings with Vic Roads we have been advised that the paths around the river will remain open throughout construction, if works impinge upon the path a temporary path must be laid around the works.

The only time the path will be closed for safety reasons is during heavy lifts such as when the bridge spans are being lifted into position.

The new bridge will include a 2 metre bike lane on the North and South side separated by concrete fencing and a further pedestrian path on the North side. All will connect to the river paths via ramps to assist cycling commuters to get to their destinations with a minimum of fuss.