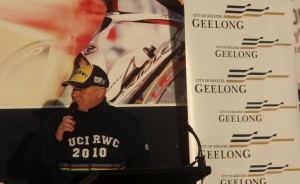 The Belmont Criterium Track was officially opened yesterday.  Geelong Mayor John Mitchell,  councillor Bruce Harwood, and South Barwon MP Michael Crutchfield were in attendance, along with many members of the Geelong Cycling Club, the Geelong Veterans Cycling Club and the wider cycling community.

The track is located on Belmont Common near the Barwon Valley Activity Centre.   It is approximately 5m wide and 2.2km long, set out such that it can be divided into shorter loops.

The criterium track is major boast to the facilities available to the recreational and competitive road cyclists of Geelong.   It provides a place for races that is off public roads, improving the safety of competitors and reducing traffic management issues.  But possibly the biggest benefit is that most of the time, when the track is not being used for races, it will be available to the wider community to use for training and exercise in safety away from motor vehicle traffic.