This is not how you park!
Post by Bicycle Users Geelong.

A bike commuter is cut-off, swerved at, then driven toward in Waurn Ponds Geelong.

The driver was reported to the police by an independent witness and the rider. No charges were laid by police.

Caution – contains offensive language (The rider tells the driver where to go).

Ninjas on the bikes

A car takes out a bike rider on Gheringhap st Geelong in the morning.

Wouldn't it be nice if the City of Greater #Geelong and/or #vicroads realised that the eastern side of the #mooraboolstreet bridge is simply unsafe for cyclists. Anyone travelling on the eastern side either rides illegally on the footpath, or detours by over 500m under the bridge, over the river, then back under the bridge again. Ridiculous. #cycling #morebikelanesplease #bikelane #bikecommuting #commuting #commuterbike #unsafe

Labor is in power in Victoria which means Daniel Andrews will have to make good on his promise:

“Labor will establish a $100 million Safer Cyclists and Pedestrians Fund to invest in new, dedicated paths and routes across Victoria, keeping bikes and walkers away from traffic.

The fund will also focus on improving routes to train stations and the CBD, creating new routes in regional areas, filling the ‘missing links’ in the existing bicycle network, and pedestrian crossings, markings and signs.

Labor will also establish Active Transport Victoria, a new division within the Department of Transport. It will focus on increased participation and safety among cyclists and pedestrians across Melbourne and regional cities.

Active Transport Victoria will develop policies, suggest changes to roads and paths, and advise on the development of the cycling and walking network. It will receive $3.3 million in funding over three years.”

More from Daniel Andrews on cycling

Read more on this saga. 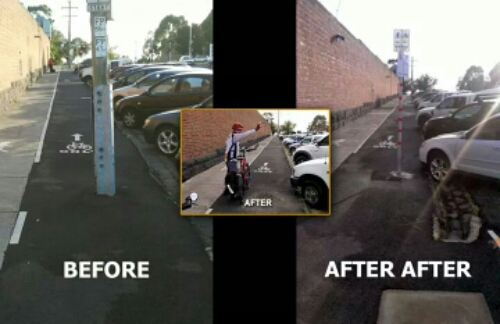 The proposed Geelong Council budget is out… It’s not great reading for riders.

They has decided to NOT put any extra money in their budget to support the recently adopted Principle Bicycle Network (PBN) implementation. This is crucial to improve safety and to encourage more people to ride to work, school, uni, shops.  To fix the intersections, fix shared bike lanes, restore existing paths, build new ones…

You can help change this:
Ask them to reconsider funding PBN projects. Please take five minutes to send an email to: contactus@geelongcity.vic.gov.au

In your own words (it can be as short or long as you want) say:

The more people that can turn the screws on a council the better. Unfortunately we need to remind council that the enviroment, health, livability and safety of Geelong and residents should be top priority. Calling your local councillor and asking them to relocate funds would also help.

How has commuter riding changed in Geelong in ten years? We’ve found some stats. You be the judge.

Methods of travel to work for a decade. Src: http://profile.id.com.au/geelong/travel-to-work

In ten years, 63 more people riding to work but 13,072 more people driving.  As a percentage of all modes of transport used, riding a bike has actually gone backwards, whereas the single occupant motor vehicle has increased.

How has this happened when? Was it from a lack of understanding? We’ve done some digging around to find out what Council and its consultants have been saying about active transport for the last decade… END_OF_DOCUMENT_TOKEN_TO_BE_REPLACED