Of course everyone knows bike transport is zero emissions and encouraging it is worthwhile for about a million reasons and very positive for today’s society.

What is not considered is what governments will impose on people when they decide it’s time to take on the big hairy beast… Will it mean carbon taxes, big fat fuel taxes, emissions taxes, banning diesel cars, taxes on car purchases, car free days, tax exemptions for riders or complete car free cities… These issues are being considered now in cities across the world. We have to be part of it…

Geelong can be forward looking or reactive. We can be innovators or we can be content with business as usual. Is the rapid change of society going to be steady or will it feel like falling off a cliff.

Rankin st Herne Hill is a different type of street than Geelong is used to. It’s a street perfect for riding through, learning to ride, skating, scooting, dog walking or even playing cricket. It’s a that gives everyone a chance to enjoy. It’s not just for vehicles like all the others.

Simple design, kerbless, just fits two cars at a crawl, the ends tell the drivers they are entering a zone where you’d expect to see kids playing so slow down.

Our submission to the Geelong Council Budget for your information:

Please consider this submission from Bicycle Users Geelong regarding the City of Greater Geelong proposed budget 2016-2017.

This year’s budget…
We’ve noted the improvement in funding for the upcoming budget.

We are happy that this has increased from last year’s budget, and from years gone by.

However, this is not enough to get more people riding, walking, using public transport or reduce car dependence  – which is the city’s agenda.

In the budget draft, we’ve noted:

The information below sets out our understanding of the City’s agenda and aims to demonstrate a complete and clear need to spend money on infrastructure that discourages car use by getting people riding, walking or using public transport.

Riding for transport is the City’s agenda
There has been at least 15 strategies since 2003 that say the City should prioritise riding, walking and public transport or reduce car dependence.

“The Strategy, while acknowledging the ongoing role of cars and other motorised vehicles, also considers the need to reduce car dependence through better integration of transport and land use planning and by better promoting other modes of travel such as walking, cycling and public transport.”  – Geelong transport strategy 2003

These strategies were all publicly available or are currently. They provide a clear case to avoid spending money on roads that encourages driving.

“Automobile dependence is when a city or area of a city assumes automobile use as the dominant imperative in its decisions on transportation, infrastructure and land use. Other modes thus become increasingly peripheral, marginal or non-existent until there are no real options for passenger travel other than the automobile.”

The following data provides a snapshot of the car dependence issue for Geelong.

The issue has been recognised since 2007 by the City:

The City, as custodians of Greater Geelong have failed to stop or slow the increase in car usage. The City has not provided adequate transport options that support its own agenda

Why is active transport important
Bicycle riding for transport that reduces car use provides many important benefits to our community, like:

Our feedback on the budget

We request that the budget for new roads ($0.8million) be reassigned to active transport initiatives. While we’re unaware of the nature of these new roads (they are not individually listed in the budget), we anticipate they are not intended to reduce car dependence, which is clearly contrary to the City’s agenda and should not proceed.

We also ask that the Federal Roads to Recovery fundings ($4.99million) and any subsequent funding from other grants be only assigned to roads projects if they are determined to reduce car dependence or encourage more sustainable modes of transport (like riding, walking or public transport).

We ask the City review its expenditure on new roads in this budget and only support road infrastructure that aims to takes cars off the road or clearly prioritise riding, walking or public transport.

Thanks for your time.

The Council have drawn up an exciting plan for a ‘Green spine’ on Malop Street Geelong. The plan includes a huge improvement to the street for riding.

The separated bike lanes will eventually extend from Johnstone park to the Eastern Gardens. This is a massive step in making the city more bike friendly and sustainable.

Time will tell if the two way design will be successful but we are very excited to see it in planning.

Last year we participated in workshops with other transport groups including Bicycle network, Bikesafe and Vicroads that provided some guidance for this plan.

Council is asking for your feedback, so please take the survey.

A section of the design 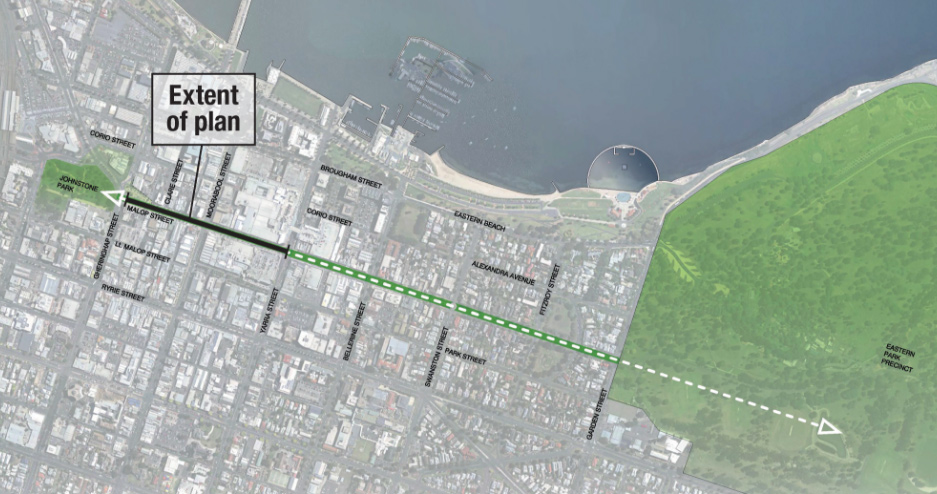 The cycleway could eventually reach to Eastern gardens

We’ve put together some education for roads crews with the help of Vicroads and Bikesafe. We’re aiming to improve how road workers deal with signage, bike lanes, riders and the work site.

Riders around Geelong (particularly the inexperienced, young or old) can find it difficult to negotiate unexpected hazards when riding… But sometimes these hazards are avoidable and vulnerable roads users can ride safer.

Thanks to Mark Tonkin(Vicroads) for supporting this and delivering our worksheet(PDF) to work crews at toolbox meetings. We appreciate the work of committee member Mark Boyanton for getting this happening. 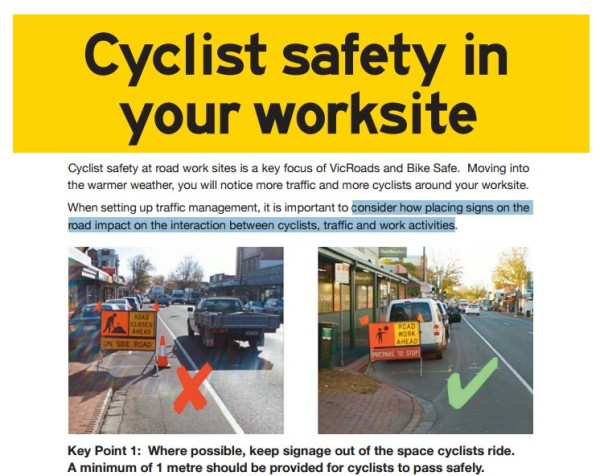 “Bendigo, population about 100,000, is leading the state with a new strategy that encourages residents to swap the car one day a week, in favour of cycling, scootering, walking and public transport.

The Bendigo Council is backing the push with dollars, with spending on shared cycling/walking paths in the city almost doubling over the next three years to $2.3 million a year.

Mayor Peter Cox:
“You can’t just tell people to eat differently, or to take up sport, or go to a gym. We need to incorporate it in everyday life. And the One-in-Five [project] is just an ideal way of doing it,” he said.

These sort of progressive steps are what is needed across Geelong.

Shopping malls are the main places in Australia that prioritise pedestrian movement.

Westfield #Geelong keep cars away for buyers. You can’t park out the front of many shops at all yet the place is pumping. The business model of priotising movement of people works, just ask the share holders.

Do city planners understand that nice, easily accessible people places is what we are drawn to – not parking lots.

The scurge of too many cars is Geelong’s problem, not too few parking spaces. Large slabs of the cities best realestate is oil stained ashpalt and not bike lanes or pedestrian people places.

The letter in the local newspaper hit the mark.

END_OF_DOCUMENT_TOKEN_TO_BE_REPLACED

A new Council plan to green the Geelong CBD. ‘City in the park‘ aims to make the city a better place to be. The overall plan is very good for the CBD and we cannot wait to see it progress.

END_OF_DOCUMENT_TOKEN_TO_BE_REPLACED

There is action happening on Brougham street Geelong…. New white paint is transforming it into a more bikeable  street. This will run from Bellerine street to Mercer street in the coming weeks. Well done to Council for doing this.
END_OF_DOCUMENT_TOKEN_TO_BE_REPLACED