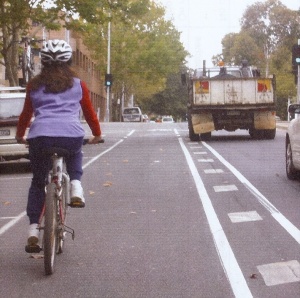 The City of Greater Geelong has proposed the use of on street bike lanes instead of Copenhagen style lanes on the Swanston Street development. The on street lanes will be between the parallel parked cars and the regular traffic lane, with a painted divider similar to that shown in the picture.

This is the COGG preferred alternative option to the original plan. It was developed after considering a number of options to placate residents opposed to the original plan. Other alternatives considered included shared paths on both sides of the street and a two way shared path on one side of the street. Both of these options were dismissed because of the high cost and large number of trees that would need to be removed.
The Geelong Advertiser has covered this development: City pulls pin on Swanston St cycling plans. Keep in mind that there are errors in this article, including the implication that the reason for the change in plans is due to the original plan costing too much and requiring the removal of 80 trees. It was the shared path options proposed by residents that the city rejected due to cost and need to remove trees, not the original plan that used Copenhagen-style lanes.

Bicycle Users Geelong supports the original City of Greater Geelong plan for the Swanston St development that uses Copenhagen style lanes and is opposed to the new option of using on street lanes with painted separator. This is because the original plan suits the stated purpose of the project to link the Barwon, bay and rail trails, as it is more suited to the users of these trails. Many trail users are not confident riding in traffic and the Copenhagen lanes will provide these users with a route linking the trails that is separated from the traffic, letting them to go further than a single trail allows.

The on street bike lanes with painted separator are safer than the shared paths that were proposed in further options that were considered by the COGG, and would be of benefit for some situations, but are not the best option for the Swanston St development where linking the trails is the main objective. Copenhagen-style lanes, while not the preferred option for some more experienced cyclists on other streets, are the best proposed option for linking the trails.

While it is not the best possible outcome with regard to cyclist safety and priority, BUG considers the original plan that included the Copenhagen style lanes to be the best solution that has been proposed by COGG.

If you support the City of Greater Geelongs original plan for Copenhagen-style lanes on Swanston Street, you can show your support by signing the petition that Bicycle Users Geelong is compiling. You can access the petition with the link on the left.

You can also send an email in support of the original plan to the City of Greater Geelong Councillors.

Update: The petition has now been presented to the COGG council.