The Bellarine Rail Trail is a great asset to the Geelong and Bellarine community, providing tourism and health benefits to the region.

Being built on former railway right-of-way, rail trails are attractive to cyclists because of the gentle slopes and minimal road intersections.   This is true of the BRT, and it is becoming more attractive as improvements are made to the trail and adjoining facilities, but one feature of the BRT is unnecessarily holding it back: the safety and access issues caused by the narrow chicanes that a trail user has to go through at many road intersections. 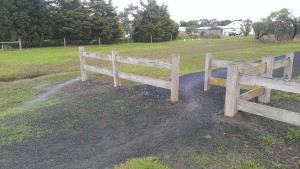 Chicane on BRT at Moolap Station Rd: Can you see the path created by all the trail users avoiding this chicane?

The BRT chicanes pose safety and access issues because the sharp turns that a cyclist is forced to do through the narrow openings.  Balancing a bike at slow speed around these bends can be very challenging, particularly for less experienced cyclists, and if they fall they could easily collide with the heavy wooden posts and rails that make up the chicanes.

The tight bends also cause access issues for those riding something a little different.  Tandems, bikes with trailers or trail-a-bikes, loaded touring bikes, recumbents and cargo bikes/trikes typically cannot be ridden through the chicanes.  Normally, families and tourists are big users of rail trails, but these are the two groups that mostly use these types of bikes (trailers, touring bikes). 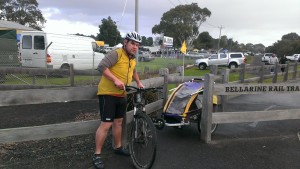 Bike with trailers and many other bikes cannot be ridden through the BRT chicanes.

Commuters are another type of cyclist that might use the BRT, with it providing a very direct route from Drysdale and Leopold into Geelong, and the only alternative being two highways.  Anyone reading recent news about how bad Geelong drivers can be (speeding, using their phones or driving whilst drug or alcohol affected), might not want to use the highways.  But the chicanes hinder a cyclist’s progress on the trail and discourage some commuters using it.  Considering the health and transport issues the Geelong region has, we should be encouraging people to use bikes for transport; not putting up road blocks.

The chicanes were presumably built with the aim of keeping trail bikes out and/or as a safety measure for cyclists, slowing them down as they approach a road intersection.  In practice, the success of the chicanes with regard to these aims is very debatable.  Trail bikes can still get through the chicanes, and there are many other places that they can gain access to the trail such as unfenced areas and gates that are often left unlocked.  The chicanes may not provide a net safety benefit to cyclists, with the attention of cyclists taken from any cars that may be on the road so that they can safely negotiate their way through the chicanes, and if they fall whilst doing this manoeuvre then they are likely to collide with the heavy wooden chicanes. 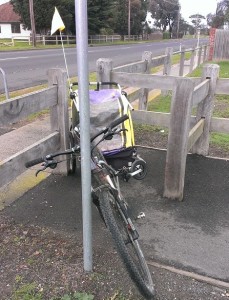 There is a design standard for this type of infrastructure from Austroads and Vicroads.  See Vicroads Cycle Notes No. 17 “Terminal Treatments for Off-Road Paths”. The staggered fence treatment, which the BRT chicanes resemble, is suggested to have a minimum distance between the first and second fence of 3 metres. This is significantly more than all of the older chicanes on the BRT (more than double in most cases).

Bicycle Users Geelong has been advising the Bellarine Rail Trail Advisory Committee for years that the chicanes are an issue, but they don’t seem to want to take notice.  The BRTAC has overseen many improvements to the trail and plan many more improvements, but none of this includes bringing the chicanes up to standard.   It would seem that the BRTAC is unconcerned with making the BRT safe and accessibly to the main users of rail trails.

In recent years, a program of widening of the bitumen surfaces around some of the chicanes has made them safer for some cyclists. But this is more of a band-aid fix than a solution as the access issues remain.

What are your thoughts on the chicanes on the Bellarine Rail Trail?  Post a comment and let us know.

5 Responses to “Chicanes on the Bellarine Rail Trail”