On Tuesday 24 February, Geelong City Council made a decision, based on very little supporting evidence, that the separated bike lanes, installed as part of the Green Spine were contributing to traffic congestion. As a result in a 6 to 5 vote, Geelong City Council voted to spend up to $2 million to remove the separated bike lane on the north side of Malop St.

There is no business case to support the destruction. No plans. No civic consultation. No report from the CEO. No expert opinion.

The Green Spine is an $8 million dollar, award winning project that is yet to be completed.

The construction of this project took 11 months and caused major disruption to businesses on this section on Malop St. Creating another construction site on this same stretch of road may force some businesses to close or relocate rather than going through the same disruption for a second time.

This move by Geelong City Council does not portray Geelong as a clever or creative city, nor does it fit with the recently adopted Sustainability Frame that was voted on at the very same council meeting on the 24 February.

We ask that all community members who care about this issue whether its because you’re passionate about cyclist safety, want to support local businesses, don’t want to see our local council wasting rate payers money, or you’re concerned that this is backwards step when it comes to addressing climate change, to attend this community rally.

The southern link of Better Bike Connections project (Waurn Ponds to the CBD) will be on the Geelong Council agenda for the 30th April council meeting!!!

The Council is likely to decide on the layout of the high street section (separated or shared) and potentially the route of the Moorabool street section.

The project (if done right) will deliver safe and direct bike routes through major corridors that are very unconformable places to ride currently. This will obviously benefit rider who ride already and also people who don’t ride because of safety concerns.

A vocal group of traders have been lobbying councillors to oppose the project… So we need you help get the best result for all riders. It is important that council also hear from members of the community who want the project to go ahead in its full form.

The most effective ways of doing this is:

It’s our view on the project that:

The Geelong Council are planning at bike path along High street Belmont as part of a larger bicycle connections project that will link Waurn Ponds to Geelong.

There is a campaign by some people/traders who want to protect some car parking on High street at the expense of your safety. You have the opportunity to influence how Geelong’s biggest bicycle project goes by adding your view to the equation – this project needs the support of all riders!

Take this survey if you’d like bike paths on High street Belmont and value the wellbeing of people on two wheels.

There are four options for people to choose. Avoid option one as it is the status quo for riding while all other options provide safe, separated infrastructure for riders.

Our bicycle group are about safety for ALL bike riders –  young , old, fast, slow, experienced and newbies… We also advocate for the people who’d like to ride but are not for safety reasons. 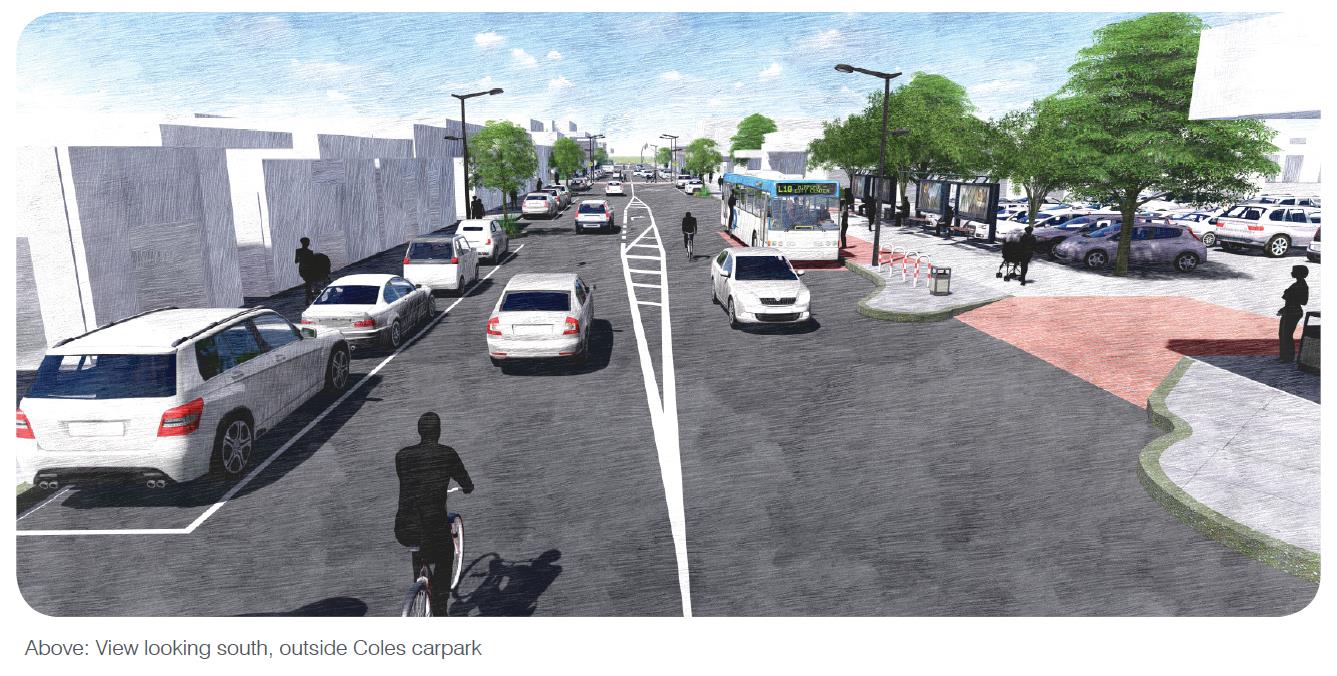 A ”shared” bicycle lane…. We know cars don”t share well on such a busy street. 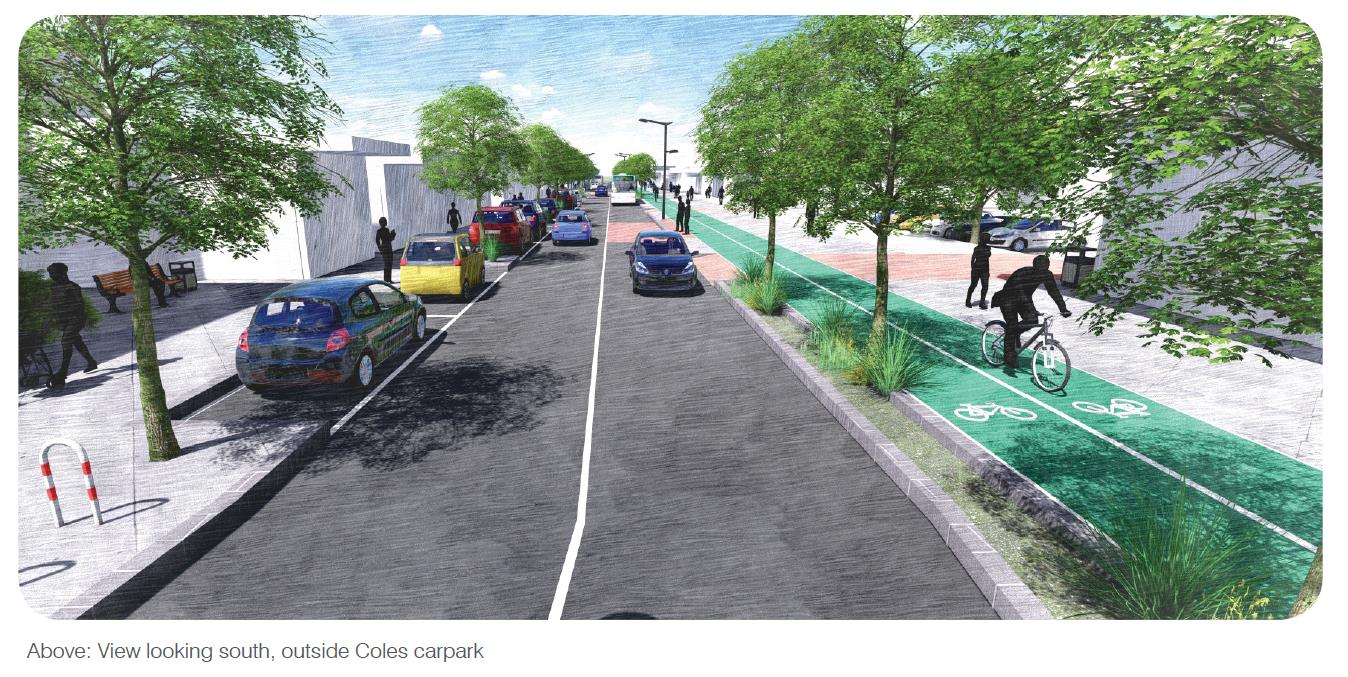 Get behind our biggest bicycle infrastructure project ever!

These projects will make it safer and easier for people to ride and help people get back on bikes.

Have a look at the plans and take the survey. Council need to know how important it will be to all riders! 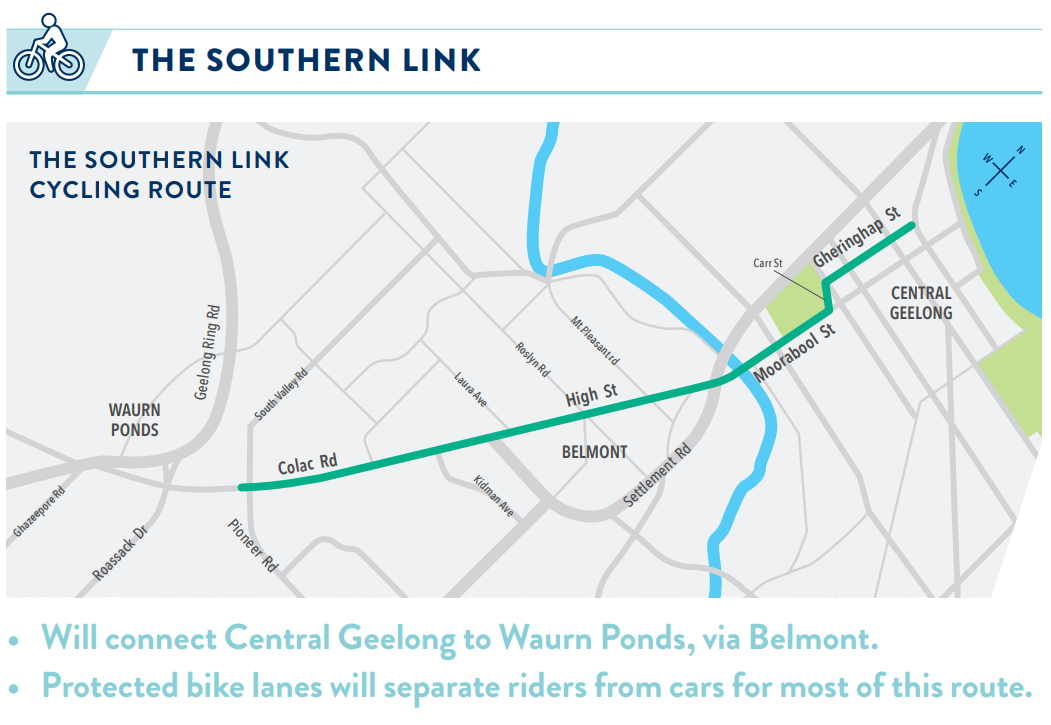 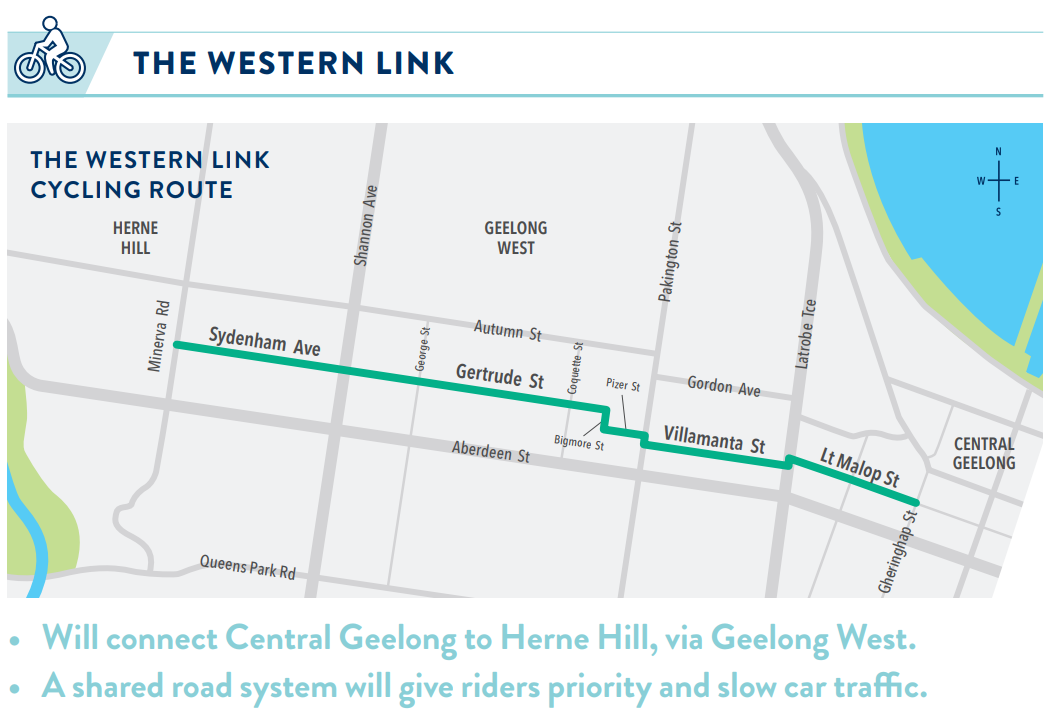 The Geelong Council are asking which ideas are most important for our region – Transport is part of the mix so make it high priority and take the survey.

Bike rider’s make up 10% of all fatal and serious injuries across the region’s roads despite being less than 2% of traffic!

Responses will help guide road safety in the future.

An excellent path in North Geelong along the rail line is a model for future path development in Geelong… It’s a great example of how shared paths should look – wide, seperated, smooth and shaded.

This needs to be extended from the city (as we’ve dreamt about before) to onto Lara.

We’ve made a tentative start into recording the people, places and moments of Cycling in Geelong with a Wikipedia page.

Take a look at Cycling in Geelong on Wikipedia. We’ve also created a page for the Ted Wilson trail.

It is only a start and they will need contributions from people like you to make them great resources. If you have anything to add (with references) you can email through to us to update but preferably you can update it yourself (as is nature of Wikipedia).

Are Godzilla roads swallowing up cars and drivers by the dozen?!

It’s easy to blame a piece of asphalt for killing people… But it’s really about vehicles, speed and humans.

We applaud TAC, Vicroads and the Addy for this awareness campaign they are on.

We hope that those agencies can see the sense in taking cars off the roads (not adding more) as well as making existing ones safer – Vicroads spends about a billion dollars each year on new roads. This adds capacity to a handle more cars and make it easier to drive. These streets never make it easier to ride – every street is car priority.

Building roads for cars forces more people into cars that don’t want to or shouldn’t be driving.

Build the local bike infrastructure so people are not forced to drive for the 15% of trips that are 3km or less.